Use of English as Resource in a Multilingualism classroom 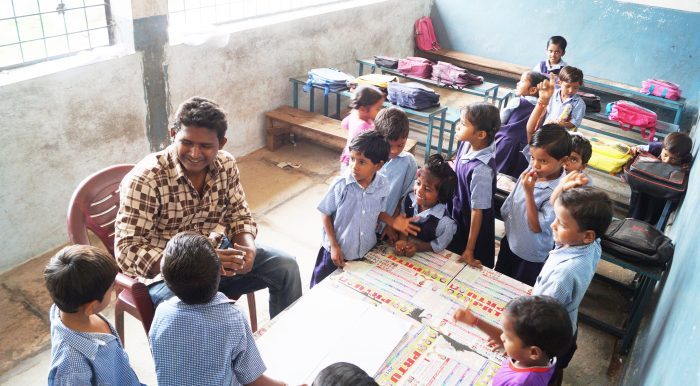 The NCF Position Paper on English Language Teaching strongly advocates a multilingual pedagogy for teaching English in India  and suggests that at the lower primary stage or at least in classes I-III, English should occur in tandem with the first languages(s)  for learning activities. (NCF 2006). Taking a cue from this suggestion, we may say that for a multilingual pedagogy for India at the primary level, the artificial barriers between languages like English and  the school language and  between ‘languages’ and ‘subjects’ should  be removed from the  class routine of the primary schools. Languages are languages for the child, call them by whatever names you like! Be it school language or English, the vocabulary, structures and discourse patterns of any language will appeal to a child if they are presented naturally in consonance with the needs and expectations of the child.

An English teacher using a multilingual pedagogy in her classroom should be aware of the fact that L1 and L2 do not reside in two separate compartments in the mind of the bilingual child when she is exposed to a second language. L1 and L2 are interwoven in the L2 user’s mind in vocabulary, in syntax,  in phonology and in pragmatics. Therefore, ‘learning an L2 is not just adding rooms to your house by building an extension at the back., it is the rebuilding of all internal walls’ (Cook, 2001:407). Using L2 along with the child’s L1 reinforces a child’s repertoire in both the languages and therefore, a multilingual pedagogy is a double-edged tool from a pedagogic point of view.

A child growing up in a multilingual environment acquires various languages of her environment  in just the same way as a monolingual child acquires her home language. Therefore, a  teacher teaching English and the regional languages at the primary level can try to find out ways of creatively exploiting the different languages available in a given classroom. The teacher should tap into the pupils’ familiarity with more than one language to advance the learning of the target language.  By using cognitively challenging tasks in multiple languages, the English teacher may generate enough linguistic inputs for the pupils to reflect and acquire the usages of the target language.

The multilingual pedagogy should be in consonance with the whole language approach which treats language as a meaning -making system.

Use three pictures. In one picture, there is a conversation between a teacher and her pupil, in another two children are in talking with each other in the play ground and in another picture, two workers in a plantation or a paddy field are exchanging greetings and day to day information Ask the pupils to enact the dialogues in their mother tongues and then you enact the dialogues in English. As the pupils are already familiar with the usages of their own languages in specific contexts, they will be interested in the usage of English in specific contexts. By introducing dialogues in natural situations, you are prompting them to see    how the vocabulary, syntax and the usage vary  from context to context  in English as well as in  their mother tongues.  Initially, they may find it a bit challenging linguistically, but the task is not  at all  challenging cognitively and contextually. A Kannada speaking child knows when to say, “Neevu hEge iddeeya” and “Neevu hEge iddeera” (How are you?), she knows when to say “ bartheeya’ and when  to say “bartheera.” Though both “Neenu yaaru” and “ Neevu yaaru” mean “Who are you?” in English, a Kannada speaking child knows the context in which  the former and not the latter should be  used. In English, ‘Hello’ can go with ‘How do you do’ but ‘Hi’ cannot. ‘Hi’ is followed by ‘How are you.’ Present all the formulaic expressions of greetings in English contextually and see how the children use them for communicative purposes. The same exercise can be done with the help of greetings used in Hindi or any other language.

How do your children use polite expressions for interpersonal communication in their home languages? Present stories in pictures in which polite expressions are used in English as well as in the home languages of the pupils and let the children be exposed to them in the guise of telling them stories. ‘Help. Help me please. Can you help me please? Could you help me please? Will you help me please? It would have been nice if you could help me. I wonder if you could help me, please.’ Children can understand the nuances of all these sentences in their home language and therefore, if  you present these sentences in English in suitable contexts, the children will be in a position to practice the usage creatively.

A language is learnt quite easily when the focus is not on the form, but on the meaning. The multilingual repertoire of the Indian children in their home and other Indian languages spoken in or around them can be a resource for teaching them English. Using numerals in multiple languages including English while  playing games can be a good resource for introducing English numerals in suitable contexts. In Kannada, ‘three’ means ಮೂರು (muru) while in Telegu it is  మూడు (mudu). The wrong production of the ‘r’  sound may make the  Kannada ‘r’ a Telegu ‘r’. Ask the children to count from 1 to 100 in their own languages, then supply them 1 to 100 in English using visuals and see how they develop language sensitivity and lingusitic competence in English. You can ask them sing songs using numerals in various languages.

Teachers often complain that the lack of correlation between the English  letters and their  sounds pose a serious problems for Indian learners. In  Hindi and  Kannada, ‘ch’ is always ‘ch’, it is never pronounced as ‘k’. Well, present the following Kannada words in sentences and see if the  Kannada speaking children can understand the meaning. ‘odu’ (read), ‘oDu. (run), ‘kaalu’ (leg), ‘kaaLu) cereals, ‘Hallu’ (teeth), ‘Haalu’ (milk), ‘’HaaLu’ (spoilt), ‘anna’ (rice), aNNa’ (brother). Then ask children speaking other languages if they can find out similar words which lead to confusion due to wrong pronunciation but  the meaning becomes clear if used in appropriate contexts. Once you develop the language sensitivity of the children, they can explore a difficult terrain without inhibition.

Language is a performing art for the children, they enjoy playing with words and expressions and therefore, the English teacher should not compartmentalize languages. It has to be kept in mind that learning English in a multilingual context  does not mean just to make the children social and interactive  in English, it affects their  cognitive domain too. While learning English along with their home languages, they start looking at things from multiple perspectives. By providing space for exploring two or more languages together and prompting the children to examine the resources of their home languages in the English class room, the English teacher becomes instrumental in developing the multilingual awareness of the children.

Teaching English in the multilingual classroom presupposes the teacher’s competence in English. Teachers should be familiar with the whole language approach, Physical response theory, methodology of situational  language teaching, techniques of using authentic material in the classroom, use of  realia,  and props etc. Visual reinforcements using labels from multiple languages may be used in the early language classrooms. All the classroom furniture and classroom features may be labeled  in English and the languages known to the children. Signs with specific vocabulary items in contexts   such   weather, months and  days  used in  different languages can be used as a part of Total Physical Response  activities.   But all these activities presuppose  the  English teacher’s competence in English. Are our teachers comfortable with their own use of English? If not, it’s time to go for a professional development course in English language teaching. Can’t we think of a professional body like TESOL  in our country too?   Teaching English is a technical enterprise and therefore, you need a license issued by a competent authority to be an English teacher!

In order to maximize communicative potential, the switching between the home languages and English, technically called translanguaging’ should be encouraged in an English class. Mixing words and expressions from various languages in the same utterance or in the same discourse is   quite natural to the Indian children who are exposed to more than one language since their childhood, thanks to the influence of cinema and television on the life of the common people. Multilingual pedagogy, therefore, should not be an alien strategy for the Indian English teachers, it should be an integral part of their curriculum transaction.

To understand more the debate between the burning need for English versus its hegemonic effects, one can further read English With or Without G(u)ilt: A Position Paper on Language in Education Policy for South Africa